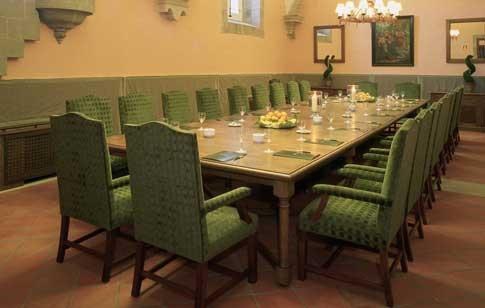 The Parador de Monforte is located in Monforte de Lemos, in the province of Lugo. The hotel is housed in the San Vincente de Pino Monastery and the Condes de Lemos palace, part of a centuries-old complex on a hill, overlooking the crenellated ramparts, and the homes and trees of the town below. The 16th-century palace was restored in the 18th century, and now houses the hotel’s restaurant and meeting rooms. The Monastery is a neo-classical stone structure, and the hotel rooms are arranged around a central cloister. An annex building houses additional guest rooms. The hotel has facilities for guests with physical disabilities. The town is about 60 km from the city of Lugo. The hotel is part of the Paradores hotel chain, which has a number of historic properties throughout the country.