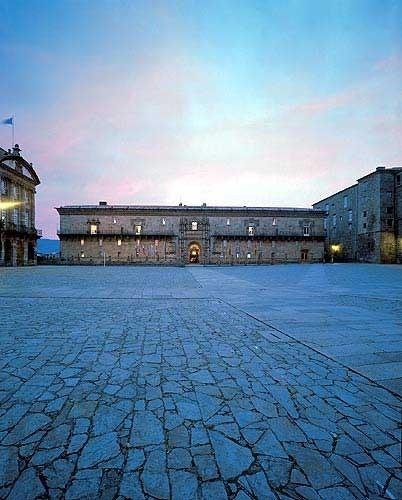 The Parador de Santiago de Compostela hotel is housed in the Hostal Reyes Catolicos, a building dating back from 1499 that has long hosted travellers to Santiago de Compostela, many of whom were pilgrims to the city's famous cathedral. It may be the oldest hotel in the world and is certainly one of the best with 5 stars. The hotel forms one side of the Plaza do Obradoiro; the cathedral forms another side of the same square. The historic hotel includes four cloisters, and secluded gardens composed of sculpted hedges. The Parador de Reis Catolicos is part of the Paradores hotel chain, which has a number of historic hotels throughout the country, and 13 in Galicia.