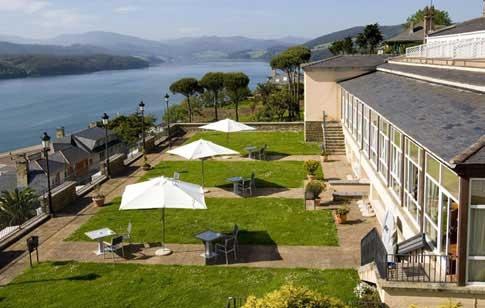 The Parador de Ribadeo hotel is a four-star hotel in a large Galician house in Rabadeo, Lugo. The town is on the border of the Asturian coast. The expanded hotel is located right on the water, and has views of the Eo estuary, and the countryside and villages surrounding the hotel and on the other side of the water. The hotel’s décor is influenced by the marine setting. The restaurant has a Galician menu. There are facilities for guests with physical disabilities. The town is about 100 km from the provincial capital of Lugo. The hotel is part of the Paradores hotel chain, which has a number of properties throughout the country.