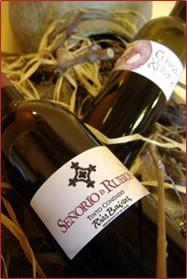 Bodegas Coto Redondo is located in the small village of Rubiós in Pontevedra, part of the Concello de As Neves. It sits at 200m above sea level on the slopes of the San Nomedio Mountain, in the basin of the River Miño.This location affords it a unique climate for vine growing and winemaking.

Several local people, who for some time had wanted to provide a launch pad from which to sell and promote the already well-known Rubiós wines, came up with the idea for the winery. In late 2003 a group of 57 people, the founding partners, made this dream a reality by establishing the Bodega Coto Redondo (Coto Redondo Winery). The winery currently has 105 partners working together to maintain the tradition, history and quality that these wines deserve.

At the same time as the winery was founded, Viticultores de Rubiós Sociedad Cooperativa Gallega (The Galician Cooperative Society for Rubiós Vine Growers) was also formed, whose members, the vine growers, send the best of their crop to the winery to make the special Rubiós and Condado wines.

After a lot of hard work and effort, the first wines from the winery were unveiled in early 2006. Many tasters were pleasantly surprised, and the bodega hope to continue surprising them in years to come with new and innovative products.

Bodegas Coto Redondo strives to marry traditional and modern values and techniques in its wine making, using the knowledge gleaned from years of experience along with pioneering advances in technology.

Despite a determination to continually innovate in order to tickle the most discerning of taste buds, as well as making the most of the latest winemaking technology available, the winery strive to maintain the very thing that has made this region's wines world-renowned - their traditional, natural taste which only comes from a well cared-for, well-harvested grape.

The facilities house not only the latest technologies in the field of the wine-growing, but also the old traditional methods, which are a fundamental part of the production of the wines. The winery boasts vast stainless steel casks alongside traditional oak barrels and a cutting-edge bottling system that makes the whole process a lot smoother without affecting the quality of the wine.

The winery is divided into several areas, with a large space reserved for the storage of the wine in stainless steel vats and another equally large area where the wines mature in barrels made of French oak, each wine being stored for a very specific amount of time.

The facilities can currently process up to 700,000 kilos of grapes, and they are designed to be able to accommodate an increased capacity in the near future.

The wines come under the Rías Baixas Denomination of Origin, in the sub zone of the Condado do Tea. This mark of origin was built up on the basis of the albariño wine variety, although in recent years several wineries have opted for the white Condado. The presence of reds was almost nil until the arrival of Bodegas Coto Redondo, who decided to take a risk and innovate in the field of quality red wines.

The Rías Baixas D.O. covers a variety of areas in the Pontevedra province, all of which share common physical conditions that typify and give rise to their wines' unique characteristics. This particular D.O., introduced in 1980 and backed up by centuries of commitment and hard work, maintains its high standards of quality by continuously supervising the wines that bear its mark. Only those wines which pass the strict official controls receive the label identifying them as Rias Baixas.

The Concello de As Neves is located in the Condado region and the River Miño waters the majority of its land, although a few other rivers also run through it, such as the Termes or the Xuliana. These rivers give the land a certain charm and help its vegetation grow. They are one of the life sources of its vines, which also flourish thanks to the gentle sunshine that caresses its fields and orchards from dawn until dusk.

As Neves is a small municipality of about 5,000 inhabitants, situated to the north west of the Pontevedra province and split into 13 parishes, each one with a great secret to discover.

The town boasts a richly varied landscape. Rivers, valleys and mountains nestle together forming a breathtaking horizon where you can lose yourself for a few days and search for the tranquillity that can often evade us in these modern times. The banks of the River Miño are of unmatched beauty, while the mountainous areas permit us to enjoy nature in its purest state.

If you ever decide to visit As Neves, pay a visit to the Monte de San Nomedio (San Nomedio Mountain), where you can drink in the spectacular view of the valleys of the River Tea and the River Miño. You can stroll along the riverbanks on the Camino de los Pescadores (Fishermen's Way) in the recreational area of Santa Mariña, visit the Santa Marta pilgrim's chapel, take delight in the sculptures housed in the Redondelo, where art and nature are combined, or amble through its parishes, whose charms will captivate you. You can also discover the great artistic and historic legacy such as the numerous archaeological remains which have been found, such as tombs, cave drawings, pre-Roman fortified towns, ancient tools and Roman bridges as well as religious monuments (churches from different artistic movements, shrines, crosses...).

As Neves is not only known for its beautiful landscapes, but also for its food, which leaves those who taste it lost for words. Highly featured are lampreys, game and, of course, Requesón (cottage cheese) with honey which has its own festival on Good Friday. All of this washed down with some of the best white wines (albariño and Condado) and red wines from Rubiós.

The Señorío de Rubiós Albariño won the Gold Medal of the XXII Cata - Concurso Rías Baixas Albariño 2010 at  Albariño Wine Festival, held in Cambados and has many similar awards.