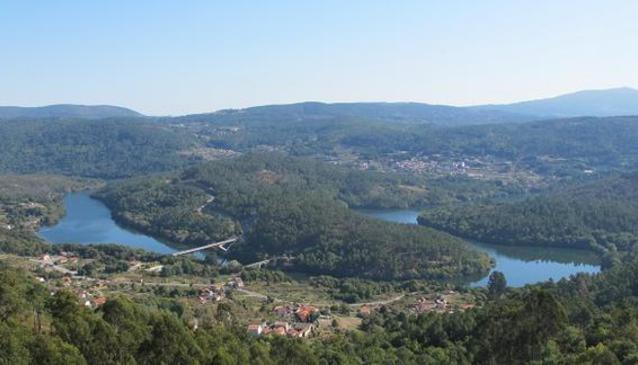 Crecente is a green and fertile land full of beautiful valleys and ancient forests looking towards the River Mino and the northern Portuguese mountains. We focus on its main attractions.

The municipality of Crecente is located in the south-eastern part of the province of Pontevedra,in the region of A Paradanta. Drained by the River Miño and with a total surface area of 57.1 Km2, Crecente has borders with the municipal territories of Arbo and A Cañiza and with the province of Ourense and Portugal.Its population is about 2,530 inhabitants who distribute themselves in the eleven parishes that form the municipality. These parishes are: Crecente, Alveos, A Ameixeira, Angudes, Filgueira, Freixo, Quintela, Rebordechán, Ribeira, Sendelle and Villar.

The economic sustenance of this municipality is fundamentally in agriculture, farms and to a lesser extent forestry,with industry and commerce being minority activities.

Between sport facilities and leisure in the municipality of Crecente, special mention is due for the municipal swimming pool, the leisure centre, football pitch, rafting, 'brave' water sports, by its great flow of waves, until the mouth of the River Miño.

Lovers of nature can enjoy two beautiful,walking routes : one in the parish of Filgueira, to the north of the municipality, the second in Vilar.

Leisure in Crecente, is complemented with its diverse fiestas and

fairs, which are concentrated fundamentally in the months of summer.

Virgin of the Rosary (the first Sunday of October),Vilar

Virgin of the Rosary (7 October) Rebordechán

Between the diverse documented archaeological sites in the municipality, further information on their importance and state of conservation and importance can be found in the detailed report (see Spanish translation), Crecente .Detailed information on Civil Architecture is also provided. Mansion Houses like the one of Queimadelos, Barreiro, or Fraga.

The departure point for the full route of natural sensations is the dam of A Frieira, the last one that retains the River Miño, and holds its calm waters until arriving at the thermal villa of Arnoia. Close to this location, only about 5 kms, is Ribadavia, of great interest,for its Jewish quarter, its churches and the wines of Ribeiro. The possibility exists also of organizing in the catamaran a series of routes and alternative activities to these itineraries, like: fiestas, meals, suppers and excursions, whenever the weather permits it, the catamaran (T 34 986 288 030) operates all the year, for all those groups that ask for their services.The regular trips begin in spring, until the end of summer.