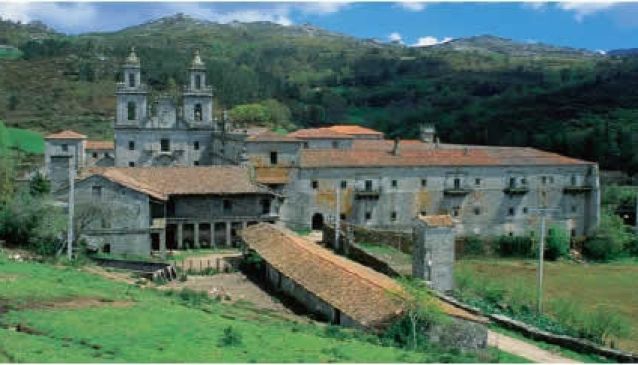 The monastery of Oseira (Monasterio de Santa María la Real de Oseira) is a Trappist monastery near Ourense which is popular with pilgrims on the Camino de Santiago (Silver Route, Via de Plata). It dates back as far as 1137, having been occupied by an order of French monks, but was abandoned in 1835. They returned in 1929 and it was rebuilt. The church was built in early classic Roman style. Its design was inspired by peregrination churches. The main chamber is known as the 'palm tree room' and boasts a dome which is supported by four columns. It also possesses a Lapidarium: a collection of stone pieces obtained during the restorations and excavations. The monastery was a favourite stopping place of Graham Greene and his Galician priest companion, Leopoldo Duran who each summer always found time to rest here from their busy schedules.

There are guided visits, €3, in the morning and afternoon, except Sunday which is after Mass (about 12.45). Apparently there are now only thirteen monks that inhabit the immense monastery. There is also a small shop where the monks sell souvenirs, cheese, honey and liquor made by themselves and where the pilgrim's book may be stamped.

It is possible to stay in the monastery especially if you phone in advance during busy times as long as you seek seclusion normally for at least a few days. In addition, there is an abergue for plgrims to stay which costs €5. The showers are in the same building, they are unisex so a little discretion is required. There is a microwave so it is possible to make a hot drink, though there are no dishes. There is a drying area outside. The main room is not heated (it is enormous with a very high roof) but there is a small room which is heated in winter.Pilgrims staying in the Albergue can attend Vespers in the evening and Mass and Lauds in the morning. On Sundays the Monks Mass (Gregorian) is at 11.30.