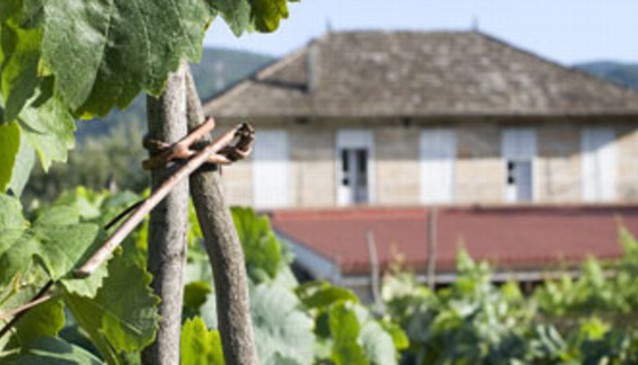 The wine cellar is located in As Chavolas (Cenlle) in Ourense, Galicia.The Miño river goes through this region from the North-west to South-west and using its waters there is in O Ribeiro a great number of thermal spas.

The climate is Oceanic Mediterranean, soft and hot in Summer and humid in Winter, Which makes it ideal for the cultivation of vines. It has approximately 3000 hectares of vineyards. In O Ribeiro there are other varieties of traditional grapes know as “Castes”: treixadura, albariño, lado, godello, moscatel, torrontes y loureira in the whites and brancellao, ferrón,sousón and caiño within the reds. The result is young wines a little bit acidic and with combinations of fruity and floral bouquets. The Ribeiro Denomination of Origin has been recognized since 1932, being the oldest of Galicia and one of the most historic in Spain.

The history of the Ribeiro wine is inextricably linked to its land. At the end of the Medieval Ages, the frontiers opened and the exportation of the wine lasted until the 17th century. Its good location in the Route to Santiago meant that many pilgrims from all over Europe reached there and got to know its wines.

Nowadays, the Ribeiro region is living a real revolution based on the modernization of the plantations and also the presence of its old wine culture. What we see is the promotion of the native varieties and the focus on the production, trade and distribution. The balance obtained between tradition and modernity means that in the region there is a big number of wineries that produce high quality wines, renowned as some of the best in Spain.

Due to the importance of tourism and wine, there is a large number of wineries that you can visit. We are one of them and therefore we give the opportunity to the visitor of knowing more about the wine characteristics and production processes and the chance to taste and purchase it without leaving the cellar.

Our wine cellar is in the As Chavolas (Cenlle) Ourense. In 2004 we created the Society for the exploitation of family-run vineyards. The tradition for the cultivation of the vines goes back to our great-grandparents. The old wine cellar has been restored and transformed into a little museum, place for wine-tasting, and storage of new bottled wine.

Attached to the old wine cellar, a modern one has been built and equipped with the latest technology exclusively for the production of high-quality wines. In this way we have combined tradition and quality.

Recently we have been selected, together with a small group of wine cellars, thermal spas, hotels, rural tourism houses and restaurants to create the Wine route of O Ribeiro”.

It is made exclusively with “Treixadura” grape from the best valleys of O Ribeiro. Because of the climate and location of O Ribeiro in Galicia, the “Treixadura” vines produce fruity, fresh and balanced wines that keep all their bouquets and accidity.

Quinta do Avelino is a monovarietal white wine made from Treixadura under O Ribeiro Denomination of Origin. Its colour is straw yellow (very shiny). The bouquet is characterized by its intensity and elegance, where the fruity reminiscences of apple, melon and yellow plum are the most outstanding. In the mouth, it can be described by its complexity of flavours. It is a rounded, flavourful and very unctuous wine with a final elegancy and pleasance. It goes well with fish, shellfish and any type of delicacy. It is recommended to be consumed at a temperature of 8º-10º.