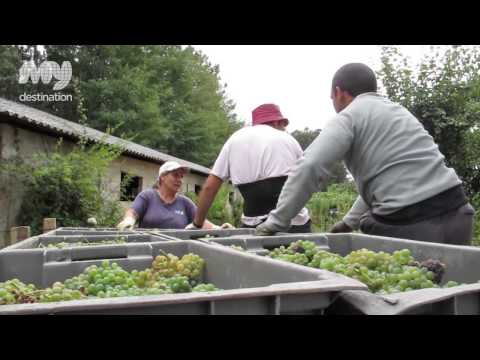 The winery Angel Sequeiros is located close to the River Miño and the border with Portugal in the south of Galicia between Salceda and Salvaterra de Miño. The winery extends to 7.4 hectares in size and as well as the vines there are the ruins of an old stately home dating from the 15th century which the owner hopes to restore one day. The vineyard is surrounded by woodland and open countryside in an elevated but protected south and west facing position to catch the maximum of the sun's rays during the year from dawn to dusk. The soils are fertile too and rich in minerals. These are the perfect climatic and natural conditions for cultivating Albariño vines.

Angel Sequeiros, the youngest son of six children, was born in 1920 ,part of a family of Galician farmers where survival and fending from the land took up all their time. In 1939 he was forced to fight in the Spanish Civil War and after returning home he married and emigrated with his family in search of a better life to escape the post-war suffering Spain. He went to Brazil and through the fruits of his hard work was successful. It was in Brazil that his son was born, Clemente who now continues his work with the winery. On returning from Spain in 1960 he bought the estate called Quinta A Gaviñeira and started to plant his vines which the winery still use to obtain their Albariño for you to enjoy as much as the Sequeiros do in creating it!

The Angel Sequeiros award winning winery attempts to capture the typical fruitiness and freshness of the Albariño grape in a signature wine which reveals its best character with the passing of the years. The production process is a mixture of the modern - fermentation in stainless steel vats at 14°C for 21 days - and the traditional. The wine is aged sur lie with a weekly battonage in 5,000 litre French oak casks for a valuable period which is determined by periodic tastings. Finally, stabilising and fining takes place in stainless steel vats at a carefully controlled temperature controlled for a period between eight and twelve months before being bottled. The result is a wine which ages well in the bottle, evolving whilst maintaining the essence of its origins.

Their wines include Albariño 2009, Albariño Lias 2010 and Albariño Foudre. Albariño 2009 is the result of a selective harvest from vines which have been pruned to limit yield, thereby extracting the highest possible level of the mineral essence of the soils in which they grow. The must is placed into steel vats sur lie and this, together with a carefully controlled 12 month maturing process gives the fresh, young character typical of Albariño wines.The process for elaborating Albariño Lias 2010 is similar and this new wine has already been awarded a Gold Medal in the International Wine Challenge in Bordeaux.

Albariño Foudre is their star wine with the Albariño elaborated in french oak barrels using a mix of traditional techniques with the most modern oenological controls. The result is a wine which is a straw coloured yellow with greenish tones and bright. The bouquet is intense,aromatic,herbs,white flowers,stone fruits, lightly spiced with mineral background. In the mouth it's fresh and potent,tasty,well structured with a good balance between aromatic sensations and oak aging,fine lies,creamy and long. This new wine has already been awarded a Gold Medal in Decanter World Wine Awards.