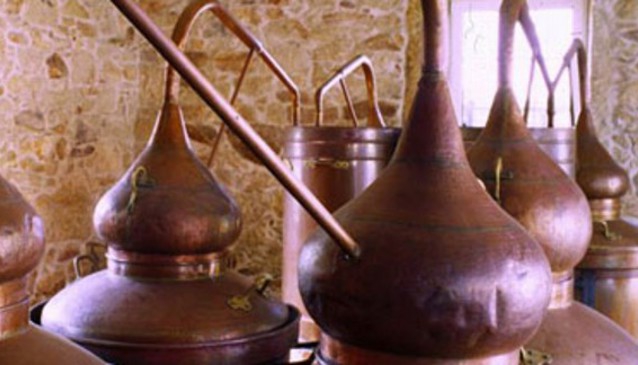 Bodega Fernández Cervera Hermanos SL belonged to a family related to the ship-building business for which wine was more a hobby than a true business venture.In 1988, La Rioja Alta, S.A. was looking for somewhere to branch out into new wine-making fields in Galicia. It acquired a majority interest in the business, and soon was able to buy the entire company, changing the name to Lagar de Fornelos, S.A.

This is a small but welcoming winery. It has the capacity to process 700,000 kilos of grapes, equivalent to 450,000 bottles per year, 50% of which are exported to the United Kingdom, Mexico, Germany, Switzerland, the United States and other countries such as Japan and Venezuela. Located in the village of Fornelos; its pink ivy-covered facade can be seen from the road. The cosiest corner is the dining-tasting room in the old part of the house, with an impressive old stone and wooden wine press. The river Tamuxe flows by the rear of the house and summer days are enhanced by the cries of the local children who come to bathe. There are ducks, trout and minks.

The ancient stone wine press symbolises this winery, an example of the hard work and suffering involved in making wine in the past. Fortunately, it is now a museum piece. But its likeness can be found on our labels and engraved on the bottles.

Aware that the only secret when making albariño is to use exquisite grapes, the five hectares of original vineyards was enlarged, gradually buying more land after overcoming the problem of small plots which are predominant in this area. 75 hectares have been created among Viña Cervera, Carballo, Seoane and Tamuxe... in O Rosal (60 hectares) and Viña Deiro (15 hectares) in Cambados. Indeed, this is the largest vineyard owned by a Rías Baixas winery.

It is well worth the effort of visiting one of these Alsatian-like vineyards protected by oak and eucalyptus trees, and enjoy the pleasure of contemplating the surroundings. The river Miño, leaving A Guarda behind, mixes with the water of the ocean at the feed of the Santa Tecla mount.

The harvest in this district is early, and Lagar de Fornelos harvests the first grapes in Galicia in a vineyard facing the sun and protected by hills from early morning mists.

Lagar de Cervera is a single-variety albariño white made from the first must, using no more than 60% of the grapes. Vinification takes place in stainless steel tanks. The wine maker is responsible for leading this noble fruit from the vineyard to the bottle, where all its features are highlighted and it can be seen as it is: aromatic, fresh, intrepid and creamy.

Lagar de Cervera is an early albariño, not only in the vineyard but also in the bottle. The grapes grow in the southernmost part of Rías Baixas (O Rosal), so they ripen early in all their splendour. The region's good weather and the nearby river give this wine its subtlety. Its colour is a bright greenish-yellow, and its aroma typical of the grape variety, which is better alone than mixed with other local grapes, regular practice in O Rosal. To the palate, it confirms the nature of the variety, which ripens well under the sun's rays.

Visits to the Bodega

The winery is found on the Atlantic coast, in an impressive landscape representing eternal dialogue between land, water and sky.The poetry which identifies Galicia is easily discovered in different parts of the winery: its granite cross, the old wine press from which the winery takes its name, the stills...

The dining room is found in the typically Galician stone house. A cosy, rustic venue, with stone walls, open beams and wooden tables. The ideal setting for a meal surrounded by the green hills of Galicia and the Lagar de Cervera vineyards. Barnacles, lobster, pies 'queimada' and Galician-style hake are just some of the delights that await you.

Visit to the vineyards.