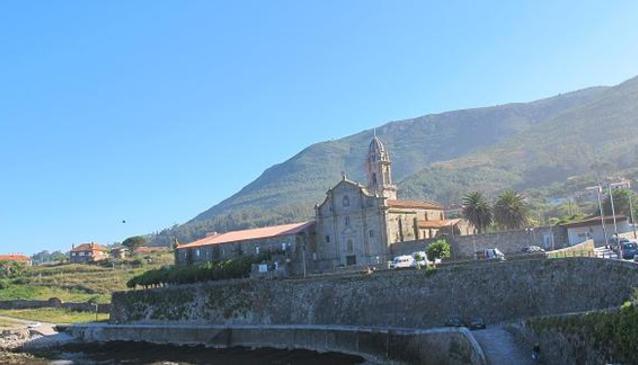 A Camboa is a relatively new restaurant which is stunningly located at the entrance to the Old Town of Oia where from its garden and conservatory terraces there are dramatic views of the open Atlantic Ocean and Oia Monastery.

The restaurant is perched on the edge of the cliff and has various dining areas and large garden/terraces which are tastefully decorated and generous in size providing a cosy and private atmosphere. In the entrance to the bar area which is of rustic appearance there are a series of murals depicting the Camino de Santiago (St. James Way) as the Portuguese way passes close-by and there is a shelter for pilgrims next to the Monastery where there is also a large car parking area so it’s easy to park nearby if arriving by car.

On the entrance wall there is a short history behind the name. It says : “Fishing - The reader that has a tourist walk down to the entrance to our port will be greatly surprised by the view of a wall in the form of a dog running back towards the centre of the estuary, ending in a brace of two metres wide, continuing then, after leaving an opening about four metres deep to reach the base of the fields that the sea reaches in the high tides.

Well, this wall against which the sea casts its fierce waves, is known as La Camboa, and was built by the religious Bernards monks to catch by foot the abundant fish on dry land, which came to be by regulating the flow of seawater through the wide opening, which , when closed with the sea at high tide with its raised surfaces so that during the hours that the water subsides it escapes through gratings in the stone wall leaving dry eels, lobsters, jelly fish, hake, turbot, sole, sardines, and countless fish, the full list would be difficult to enumerate. Sometimes the winter inhabitants of Oia could pass all the winter without having a scarcity of fish. The fish were not sold, they were given away. The villages in the parish of Oia swam in its abundance, because the port of Oia was continually a marine port full of delicacies. La Guardia, Rosal, Tomiño, Baiona, Nigrán, Gondomar have kept mementoes of this true hamper in its commercial and economic history.”

The restaurant specialises in meat dishes as well as cod Portuguese style. So there are Galician meats, pork,sausages,chicken,lamb or steaks or a range of cods and hake either barbecued or grilled. There are a range of other dishes to reflec t its location next to the fishing port of Oia. There are a wide variety of hot and cold baguettes with main fillings including bacon,chicken,roast ham and squid as well as hamburgers all for only 4€ or less. A Camboa is the perfect place to try a selection of tapas like baby squid,octopus,croquettes,peppers,mussels and various pasties again economically priced. Customers who would prefer something more substantial can try a range of main courses such as baby squid with chips, fried egg and salad and roast ham with chips, green peppers and salad all for only 5.25-8.50€. There are also a range of scrambled egg dishes with mushrooms ,prawns etc and salads. And there are a selection of pizzas and an extensive range of desserts including flan,chocolate and biscuit sponge cake and ice cream.

The wine list includes an extensive choice of albariños or local wines from O Rosal but wines from La Rioja and Ribera del Duero are well represented. There also a range of other Galician wines such as mencia,godello and ribeiro.

This is a place with special charm where you feel at home smelling the fresh sea air full of algas great for the health in a relaxed and peaceful atmosphere thanks to the waiting staff.