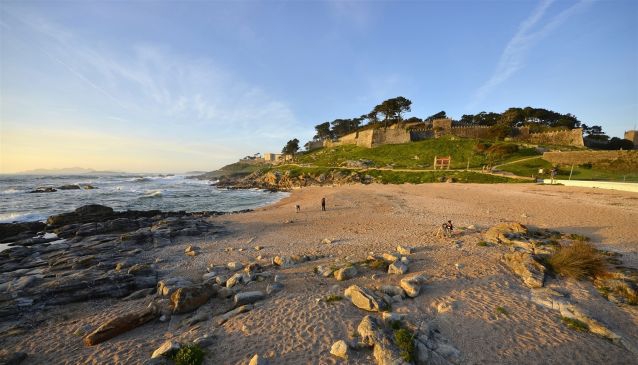 The tourist and fishing town of Baiona, is located in the south west of Galicia, surrounded by a bay that takes its same name, its north and west limits are the Atlantic Ocean, to the South with the municipalities of Nigrán and Gondomar, with which it forms the area known as the Val Miñor and Baiona estuary.

The climate of Baiona, like the rest of the Galician estuaries, is of oceanic character, with mild winters and warm summers, with an annual average temperature of about 15º C. In addition, there is the influence of a microclimate, which differentiates the south coast from the province of Pontevedra, this is characterized by a lower number of rainfalls throughout the year.

The southern coast of Baiona which runs from the Cabo Silleiro to the peninsula of Monte Boi, is a rocky zone and open to the Atlantic Ocean, with beaches 'A Concheira' and 'Praia dos Frades' like clear exponents, paved with seashells, of crystalline waters, with a variety of vegetation and marine fauna. Within the Bay of Baiona, guarded from ocean forces, protected by the peninsula of Monte Boi, is the port of Baiona, flanked by beaches of 'A Ribeira', 'A Barbeira', 'Santa Marta' and 'A Ladeira',with white and fine sands smoothly caressed by the sea.

The most oriental part of Baiona is composed by a rounded mountain range, some of them rising to 700 metres in altitude above sea level, like the mountain range of 'A Grova', becoming an authentic natural viewpoint, from which all the Val Miñor is visible at a glance, the Cies Islands and the Estelas Islands, emerging from the Atlantic Ocean and extending itself, on days of good visibility, up to four of the Galician estuaries.

Baiona Council was awarded the Quality Coast Award in 2013, an international prize, in recognition of the environmental quality of its coast for sustainable tourism.