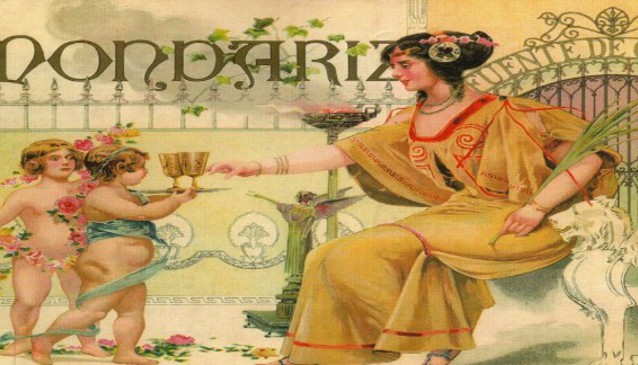 Aguas de Mondariz is a high quality mineral water extracted from Mondariz Spa and is sold throughout Spain and further afield.

The history of Mondariz revolves around the exploitation of its minero-medicinal waters. There are documents that relate Mondariz with the ancient Roman village of Búrbida and indicate that the ancient inhabitants of Sobroso Castle were well aware of the existence of these waters and used them in installations that were destroyed during the Battle of Uclés (12th century).

The resurgence of these waters (in the 19th century) is chiefly due to Mr. Domingo Blanco Lage, a physician from Mondariz who observed that his patients from the village cured their skin ailments by using these waters. He then used the waters for therapeutic purposes in his professional career.

The years of great splendour however arrived through the intervention of Mr. Enrique Peinador Vela and his family. These waters obtained the category of water for public use in the year 1873 and this mineral water has been bottled ever since 1877 (the plant was then situated in a separate building next to the spring).

For many years, our activity has been carried out in parallel to that of the Spa called Balneario de Mondariz, which is the most modern Spa therapy centre in Galicia, and is located in the River Tea valley.

'This is not a Spa: it is a Water Palace' said the Nobel Prize winner José de Echegaray when he discovered the salubrious effects of the waters of Mondariz.

The springs are situated within the limits of Mondariz municipality and set within the hydrographic basin of the river Tea, which is a tributary of the Miño river. The springs are located near the place where the streams Xabriña and Aboal converge.

The granitic substratum through which the waters flow determine their characteristic composition and provide them with certain intrinsic features that are beneficial for health. Isotope analysis show that they are very old waters (deeply underground), whose residence times in the aquifer (hydraulic residence) oscillates between 60 and 150 years. They flow to the surface at a constant temperature of 16.5º C throughout the year.

The traditional richness of the springs has been protected by erecting a mining protection perimeter, construed as a place where human activity ought to be planned and controlled in order to prevent deterioration of the quality of the springs and/or its flows. To that end, Mondariz has over the past years invested a part of its profits into hydrologic research of this environment, through collaboration with the most prestigious professionals from the sector.