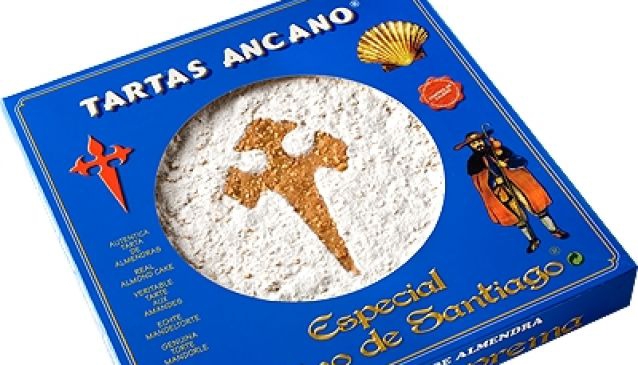 Initially, Tartas Ancano began making a range of cakes, doughnuts and pastries, but then began to experiment with the core ingredient of what is now their entire business: the almond. Thus was born the typical almond cake from Portomarín and its production on a great scale. Tartas Ancano have pioneered the manufacture of these almond cakes, now producing the most famous almond cake in Galicia.

A few metres from the Iglesia de San Nicolás, Tartas Ancano have a small shop.The new factory opened in 1995 is located on the edge of Portomarín in a modern, state of the art unit. This allows them to combine craftsmanship with the production rate appropriate to their requirements, as the skilled craftsmen and quality of raw materials are still the essence of the work and success of Tartas Ancano.

The almond cake is a variety of the 'Tarta de Santiago' which has the denomination of origin status in recognition of its uniqueness. Tartas Ancano are on the Camino de Santiago and Portomarín is one of the landmarks in the final stretch of the Camino Francés. In this town, thousands of pilgrims every year find shelter and rest, stopping for a cake from Tartas Ancano as they do so.

Savour the delicious cakes for yourself; one of the pleasures that reflects the culinary culture of Galicia. You can enjoy the cake at breakfast, dessert, or a snack between meals so Tartas Ancano occupies a prominent place in the world of Galician pastries. They also make delicious 'chocolates stones', which is a combination of dark chocolate with toasted almonds.