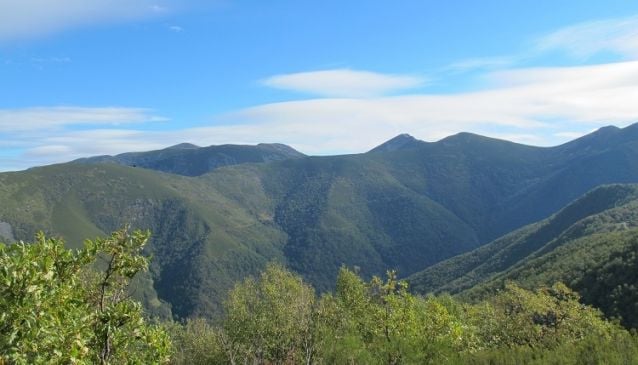 Os Ancares mountain range is the largest natural area in Galicia extending to over 50,000 hectares. It is remotely located in the eastern part of the province of Lugo on the border with Castilla-León and Asturias. Its landscape is beautiful with deeply incised valleys and mountain peaks which rise to a height of just over 2,000 metres. It is rich in biodiversity where you can see endangered species such as bear which have recolonised the mountains and capercaillie  as well as wild boar, deer, rabbits ,foxes ,wildcats ,squirrels, eagles and owls.

Os Ancares was designated a UNESCO Biosphere Reserve in 2006 and is popular for its tracks and trails many of which are suitable for families with chidlren. In winter they are covered by snow so summer and autumn are the best time for walking and to appreciate the outstanding natural beauty. There are streams and small waterfalls, as well as hamlets and small villages, medieval castles and churches, Celtic 'castros' (forts) and traditional dwellings such as the stone and thatched roof 'pallozas'.

The best starting place in Galicia to explore Os Ancares is at  the village of Becerreá which is located to the east of the city of Lugo on the A6 road to Ponferrrada. An alternative is to head for Pedrafita do Cebreiro further to the south-east which is on the Camino de Santiago.

The first place to visit is the Ethnographic Museum (Museo Etnográfico) in San Román de Cervantes. Here you can see the ancient 'pallozas' which are pre roman dwellings made of stone with thatched roofs. Close  to San Román where there is an old church you can find a fortified settlement, Castro de Cervantes.

Then it is on to see Navia de Suarna castle (Castelo de Navia) which dates back to the 11th century. There is also a beautiful old roman bridge which is made of slate (Ponte Vello de Navia) with amazing views.

The hamlet of Rao (Aldea de Rao) is worth a visit as you can see  traditional houses, blacksmith's shops and mills along with the parish church of Santa María which has two special altars.

The next  stop after  Degrada, is Os Ancares Nature Centre, with spectacular views of the mountains from its viewpoint (Miradoiro da Campa de Fieiro) . The Centre (Club Ancares) opens from 1 June-15 September, and you can find information about Os Ancares, their Albergue, activities and hiking routes. For the adventurous why not climb Tres Obispos Peak, one of the area's most famous. It is realtively easy and the route will take approximately six hours.The centre has a cosy bar so enjoy the views over a nice drink.

Then we arrive in Piornedo, 10 kilometres from Degrada to see one of the sights of Os Ancares its most emblematic features - a whole settlement of  its 'pallozas': Some of these traditional houses can be visited, such as the Museum of Casa do Sesto which recreates what life was like living in one with a large collection of rare docements and artifacts from historical times. The entrance is only 1€ and there is a shop full of postcards, gifts and gastronomic products from the area. Buy a bottle of cranberry liqueur as there are plenty of wild cranberries in the locality. It is open on weekends and holidays from October to the end of May and is open every day from June to September, except during the owners' holidays.

A bit higher up in the village as you walk towards the church you can see amongst the complex of buildings the Hórreos de Piornedo. This is a Grain store with a square, wooden structure with the door is located at one side.It has a thatched roof and is suported by wooden or stone feet, upon which there is a slab to keep rodents out. It was used as a store for different products (cereals, meat, cheese) and the space below the chamber was used for keeping wood, the cart or work tools. The design is Asturian.

The final place to see is Doiras Castle (Castelo de Doiras). The castle is privately owned so we can only admire its appearance. It dates back to the 15th century. The roman bridge is a must do too. Then we can retrace our steps by heading back to Becerreá.