The pilgrimage city of Santiago de Compostela is undoubtedly the most famous tourist destination in Galicia; but venture a little further inland and you’ll discover historic towns, picturesque villages, and a unique landscape found nowhere else in Spain.

The choice of places to visit is endless but here are five suggestions to whet your appetite.

Situated approximately 100 kilometres southwest of Santiago de Compostela is Monforte de Lemos. Despite its size, Monforte is a city: an honour bestowed on the town in 1885 by King Alfonso XII. Two years earlier, Monforte had become a major rail junction on the Madrid to A Coruña railway. The Galicia Railway museum, located close to the station, reflects the economic importance of this historic rail link.

The city skyline is dominated by the Torre da Homenaxe or Homage Tower, the Palace of the Counts of Lemos, and the 17th century monastery of San Vincente do Pino: all of which are perched on a hilltop in the centre of town. In 2004, after major restoration work, the palace and monastery opened their doors to the public as the all new Parador of Monforte. A short walk down from the Parador is the restaurant O Grelo: an ideal location for a spot of lunch or cooling refreshments before continuing on.

At the foot of the hill lies a labyrinth of narrow streets and paved alleyways that form a major part of the old town. On Rúa do Comercio you’ll find the Ribeira Sacra wine centre: a relatively new addition to the city. On the first floor, visitors are given the opportunity to discover the history of wine making in the area through interactive exhibits. On the ground floor there’s a shop featuring wines from most of the local bodegas (wineries) and a bar where you can select your favourite and enjoy a tasty tapa. The centre also doubles as the Oficina de Turismo (Tourist Information Centre).

Having visited the wine centre, stroll down the street and across the 16th century Romanesque bridge. Directly ahead is the convent of the Clarissa nuns. As well as being a working convent, it’s also home to the museum of sacred art; and houses one of the best collections in Spain. A tour of Monforte would not be complete without visiting the 16th century college of Nuestra Señora la Antigua. Known locally as El Escolapios, this impressive building houses a small museum of fine art including two paintings by El Greco.

If you decide to stay for dinner, I can highly recommend Manuel Bistró. The owner and head chef Manuel Jnr, welcomes each guest personally and provides an excellent selection of regional and international cuisine. Why not try a fillet of Galicia’s famed beef in a rich port sauce; washed down with a bottle of Barrica Abadia da Cova a delicious mencia red from Adegas Moure. 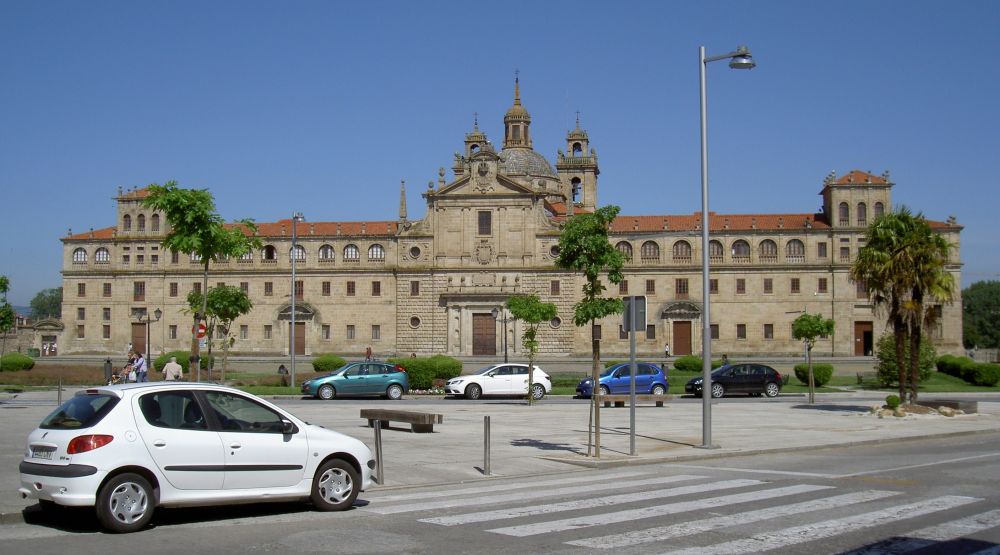 The sleepy village of Doade lies 14 kilometres south of Monforte de Lemos along the LU-903. The village is home to two of the best bodegas (wineries) within the Ribeira Sacra wine denominación. Commanding an enviable position overlooking the Canyon of the river Sil, and built in the style of an enormous Roman villa, is Bodegas Regina Viarum. The other winery, Adegas Algueira, has been built in a traditional Romanesque style using reclaimed stone. There’s a restaurant on the premises and they also run Pleasure Trips: a boat cruise along the river Sil.

Doade is also home to one of the most stunning miradors (viewing points) in the Province of Lugo: Pena de Castelo. To visit Galicia and miss this vista would be like journeying to Arizona and failing to see the Grand Canyon. The stroll to the mirador is along a well-made track; shaded in some areas by pine forests and natural woodland. The tiny chapel of San Mauro marks its end. The view of the canyon is breathtaking: terraced vineyards rise to over 1000 metres from the banks of the river Sil which snakes silently through the gorge like a giant anaconda.

If you’d prefer to get a little closer to this amazing landscape, the tourist train Aba Sacra will take you on an unforgettable journey through this ancient terrain. On your return, why not pay a visit to the restaurant aCantina. Their menú del dia (menu of the day) is only nine euros. This home cooked meal includes three courses and a bottle of local wine. Alternatively, pull up a stool in the bar and order a tabla (tablet): a large platter of cured meats, local cheese and thick-cut chunks of crusty bread. 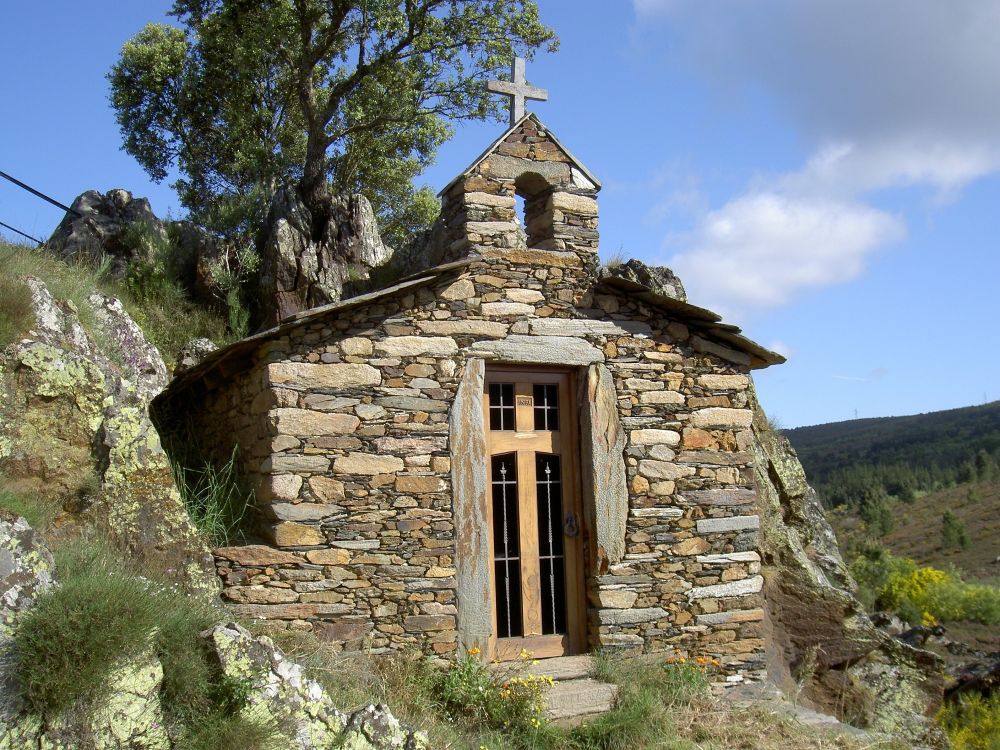 Chantada is an unassuming little town 30 kilometres northwest of Monforte de Lemos. Over the last 10 years, the town has undergone an amazing transformation. Buildings of architectural significance have been restored, public spaces refreshed and a sweeping footpath created along the banks of the river Asma.

The old town is characterised by narrow cobbled streets and medieval porticos. There’s a small square in the centre of the old town from where a labyrinth of narrow lanes criss-cross the town centre. Hiding within these small alleyways and shaded passages are a host of cafes, bars and interesting shops.

The restaurant Centro, is well worth a visit. They serve a range of traditional Galician dishes including Merluza a la Romana: a succulent fillet of lightly battered hake, and Carne Guisada: slow cooked chunks of Galician beef in a rich sauce; and the house white is a delicious, locally produced albariño.

Forty kilometres northeast from Monforte de Lemos, is the idyllic village of Samos. Famous as an overnight stop along the Camino de Santiago (Way of St. James) it’s also home to Mieles Anta: one of the largest producers of honey in Galicia. The village nestles comfortably on the banks of the river Sarria, with the Monastery of San Xulian at its heart.

The monastery is used by monks of the Benedictine order as a college of Theology and Philosophy. They also provide visitors with daily guided tours.

Within the Great cloister is one of Galicia’s modern wonders. Spanning the full length of three of the four interior walls are a series of stunning murals depicting the life of San Bieito: patron saint of Samos.

The artistry and beauty of this monastery and church cannot be overstated. To visit Galicia and miss out on this picturesque village would be a tragedy. 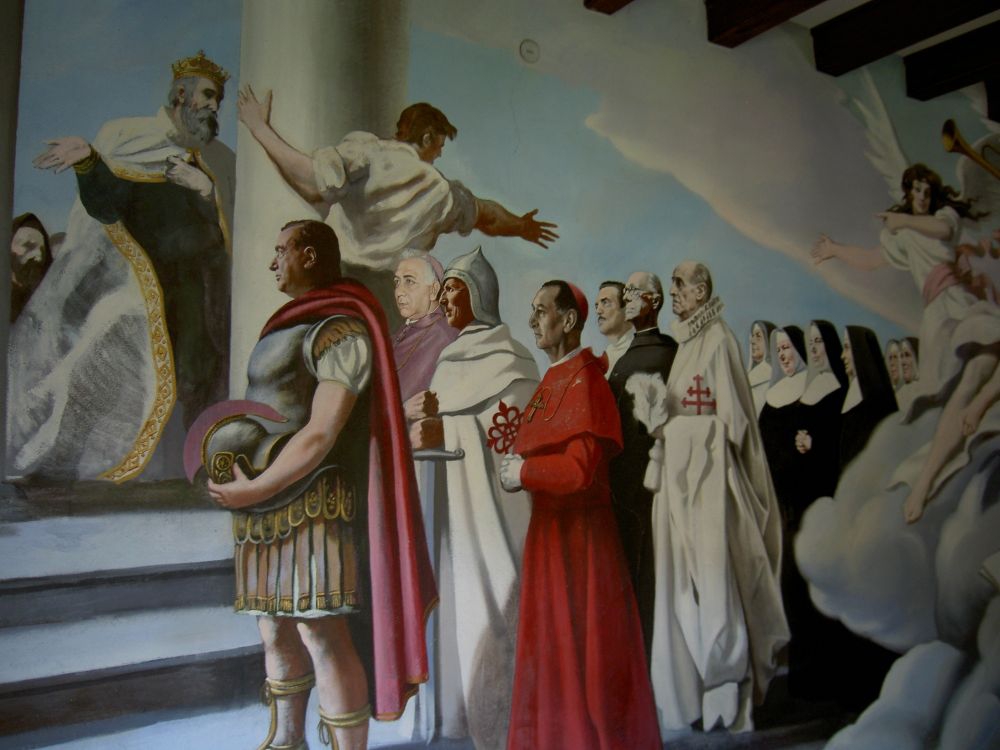 It’s difficult to believe that the present day Portomarin, located 46 kilometres north of Monforte, is just over 50 years old. In 1956, construction work began on a dam, downstream from the town at Belesar. By its completion in 1962 most of the town had been moved, stone-by-stone, to it present location. Centrepiece of the new town is the Iglesia de San Juan (Church of Saint John) also known as San Nicolas. It’s a temple-fortress built by the Knights of Saint John of Jerusalem in the 13th century and illustrates design features of both a church and a castle.

Cafes and bars line the street to the main square providing visitors with the perfect setting to enjoy one of the town’s most famous exports: Tarta de Santiago. This traditional almond-flavoured cake, bearing the distinctive icing sugar motif of the cross of St. James, is manufactured in the village by Tartas Ancano. Pull up a chair; order coffee and cake, and relax in the afternoon sunshine as weary pilgrims hobble past.

Craig Briggs and his wife Melanie moved to Galicia in 2002 and have lived there ever since. He is the author of a bestselling memoir, ‘Journey To A Dream’ which tells the story of their first year in the region. To purchase a copy of his book follow these links:

If you’re looking for somewhere to stay in Galicia why not take a look at their luxury farmhouse rental property in the sleepy village of Vilatan. 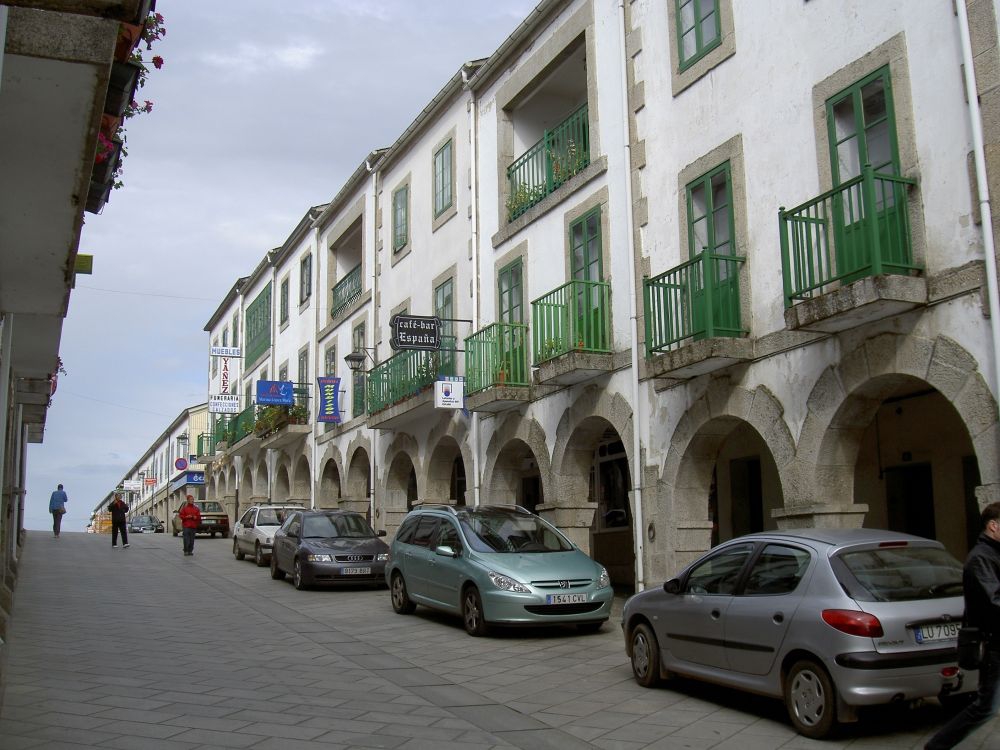