Finisterre, to the End of the World

You can’t help being mesmerized with your first glance at Cape Fisterra in the province of La Coruña. Not only are the surrounding waters a brilliant blue, the scene looks so magical. Rich in history, the ancient fishing community of Finisterre has not only been an inspiration to those seeking their own magic, it’s a land of importance for the pilgrimage, the Camino de Santiago. When the world was still considered flat, many journeys ended at the Cape, where the sun disappears over the horizon of the Atlantic. The Cape has long since been the site of spirituality, reflection, battles, and tragedies at sea. Finisterre means “lands end” in Latin, and on our journey today, We’ll take you to the end of the world.

This is an early view from the Camino Finisterre which travels 87 kilometres from Santiago de Compostela to Finisterre. Here, we’re looking across the Corcubión Estuary, Ría de Corcubión, to the Cape and with Finisterre on the nearside. Let’s begin on the Cape itself. 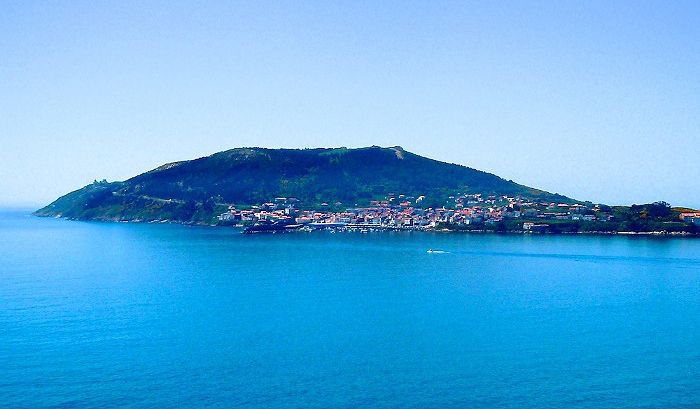 First, let’s stop at this impressive lookout above Langosteira Beach. Beyond the ancient crucerio are two kilometres of beautiful white sand that is packed with tourists and locals on warm sunny days. The east beach and a great place for watching the sun rise.

Since early times, fishing has been important to the economy of Finisterre. The harbour has one of the busiest ports in Galicia with a fish market where the locals display and sell their catches of the day. The vibrancy of the town has collected in the area near the port with shops and restaurants overlooking the harbour. You may wish to sit on a patio and try the local seafood. The shell fish, percebes, is a barnacle and considered a delicacy. Don’t forget to also try pulpo a la gallega, the octopus dish. Maybe, you just want to relax with a glass of albariño, the Galician white wine. Along with fishing and agriculture, tourism is very important to the economy of the region. The population of Finisterre swells in the summer as the Cape is a major draw for pilgrims and tourists alike. The drive from Santiago de Compostela takes approximately one hour whereas the walk, about three days.
Facing the harbor, this statue has an encryption that reads “Galegos Espallados Polo Mundo,” or “Gallegos around the world.” Did you know that the creation of the first medieval kingdom in all of Europe was within Galicia in the early fifth century? This was after a treaty was signed by the Sueves and the weakening Romans, who would soon retreat.
Let’s continue along the seawall past a much smaller beach, Praia Riveira, as we look back at the downtown area. Behind us, sits another important Finisterre landmark...
The castle, Castelo de San Carlos, was built in the 17th century to defend the town from the French and English. It had been heavily damaged during numerous battles and for many decades sat in near ruins. It was rebuilt and today houses a museum dedicated to fishing.
Let’s leave the castle and continue our journey along the paved road for about three kilometres. You have your choice of walking, driving, or taking a bus that leaves the downtown area for a relaxing ride to the end of the Cape. Ahead, is an early view of the lighthouse. 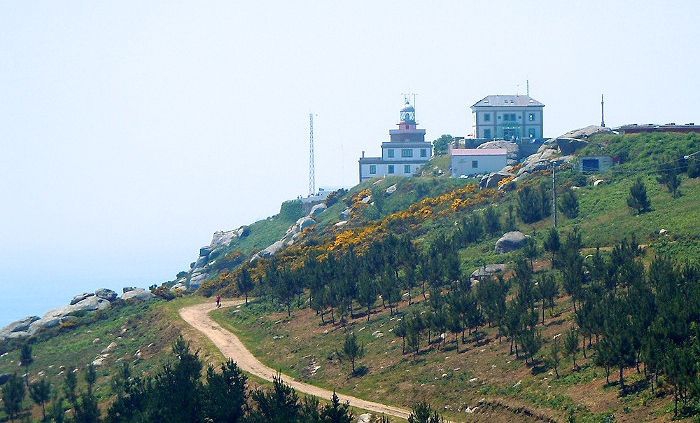 Faro de Fisterra, the famed lighthouse that is one of the most important landmarks in all of Galicia. The lighthouse was built in 1853 and can be seen on a clear day from 30 kilometres at sea. The northwest coastline of Galicia is aptly named Costa da Morte, the Coast of Death. The coastline is rough, jagged, and treacherous. Numerous vessels are resting on the floor of the Atlantic, with many more lives lost. It’s not only pleasure and fishing boats that run into trouble, but well-documented naval battles between the French and English took place just off Cape Fisterra. Visitors are also reminded to be careful walking on the slippery rocks as deaths have occurred here too.

Arriving at this bollard or waymark is very memorable and touching. It may be difficult to read, but the sign says 0.00 KM. For pilgrims, especially those who started in St Jean Pied De Port on the French side of the Pyrenees, you arrive here full of emotion, and grateful that this part of the journey is over, and you’re safe and sound. One knows that once you begin walking the Camino, your journey never ends.

Nearby is the fire pit where pilgrims offer up a piece of clothing to be burned as a ritual in the sense that the ending of their Camino is part of a new beginning of life. A handwritten note is often included, possibly in memory of a loved one, or to repent one’s sins.

Adjacent to the fire pit is the bronzed boot, also a symbol of the end of this part of your journey. For some pilgrims, the worn boots are sacrificed in the fire pit.

Dolphin watching is another popular activity and sometimes, pods can be seen from the Cape. This statue symbolizes the importance of these amazing and beautiful creatures to these waters. 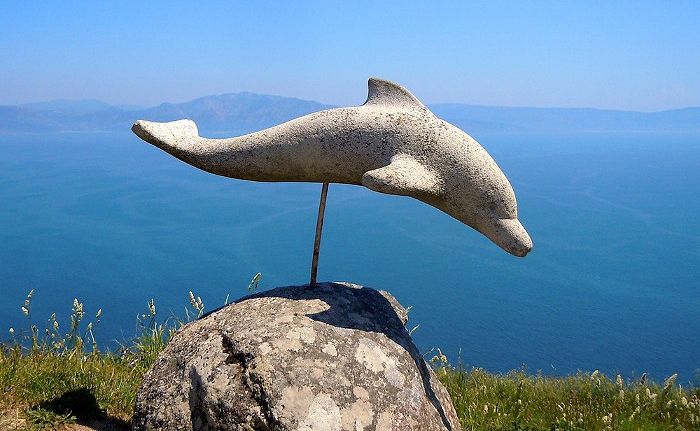 The crucerio at the end of the world. Pilgrims place stones, on this and similar crosses along the Camino de Santiago for many reasons. Sometimes, they include notes on paper or cloth — in memory of their journey and the lessons learned, or a letting go of the past and a look forward to a new beginning. It could be a note to themselves; a promise to keep, a memory of a loved one, or a repenting of a sin. Maybe they’re saying goodbye to someone and ready to greet someone new. Whatever the reason, it’s personal and meaningful.

Our journey today is not complete though, as we continue to the peak of Monte Facho with amazing vistas of the famous beach, Praia do Mar de Fora and the surrounding area. Similar to walking the Camino, these are memories that will last a lifetime.
It’s interesting to note that the Romans had built a road up to this point, and it’s believed that a settlement once stood here. In fact, ruins and artifacts from throughout the centuries have been found on Monte Facho. For some pilgrims, locals, and notables, the mountain has become a final resting spot; a finality of the journey of life.

Although we didn’t have a classic sunset from Praia do Mar de Fora, it was more than special enough. The surrounding area is also quite beautiful with wind swept dunes and their accompanying vegetation of small shrubs, grasses, and flowers. From here, you will enjoy your short walk or drive back to Finisterre.

Whether you arrive on foot or on wheels, please give yourself enough time to relax in the ancient and magical town of Finisterre. Eat, relax, and visit the beaches, landmarks, and of course, Cape Fisterra. Go out to sea and get closer to the dolphins. Watch the sun rise or set, and get closer to yourself or a loved one. When you come to Finisterre, you are in for a treat. You won’t regret your journey to “the end of the world.”

Randall St. Germain is the author of Camino de Santiago In 20 Days. which recounts his 20 day walking journey across Spain on the 500 mile French Way of the Camino de Santiago. Last summer, he completed his third Camino, the 530 mile Camino Del Norte. Randall blogs at his website, Camino My Way, where there are over 70 posts, and 1,000 photos from his journeys. He enjoys photography, writing, reading, nature, hiking, long-distance walking, and sometimes, relaxing.
If you would like to buy Camino de Santiago in 20 Days you can do so here.
You can also keep up with Randall via Facebook and Twitter. 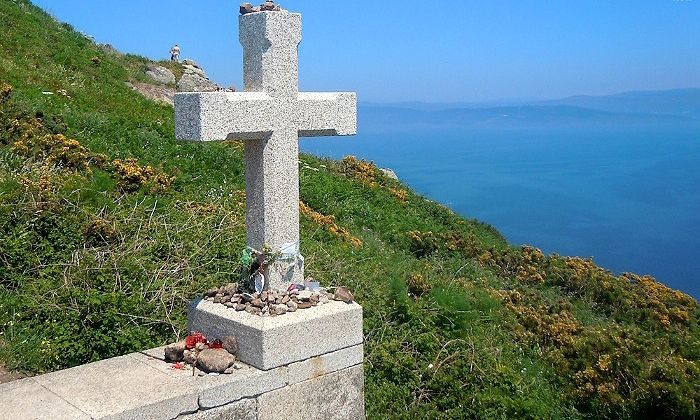