Galicia to the rest of the world is a relatively unknown region of north-west Spain, famous to some thanks to the inspiring Cathedral of Santiago de Compostela and the pilgrimage routes which converge there. However, Real Club Deportivo de La Coruña (Royal Sporting Club A Coruña) has over the years been a great ambassador for the region having helped to spread the word about Galicia, its culture and its people. The history of the football club is long and interesting as they have won the League (La Liga), hosted important cup finals,international matches and even World Cup games. We attempt to explain a bit about this as football is well loved by the majority of galician people as well as the spanish as a whole.
There can be no better situated football ground in Europe if not in the world.! The walk to get to the Estadio Municipal de Riazor (Riazor Stadium) which is in the heart of the city along the maritime walkway is very special. You can enjoy the views of the beaches, Playa del Orzán and Playa de Riazor and the wild Atlantic Ocean (Coast of Death) as well as setting of the city. The staduim which is owned by the local council virtually rises out of the sea next to Playa Club where many fans meet before entering the 35,000 capacity stadium. Although small compared with some of the other spanish grounds, it has plenty of character with its curved roof fitting of its setting and it generates a lot of atmosphere with the pitch itself always in immaculate playing condition no matter how much it rains. It can rain a lot here in the winter!! Groups of a minimum of 20 people can enjoy a tour of the facilities during the football season (September to May) every Saturday at 13.00 for 4€ per person, check the link for more information. 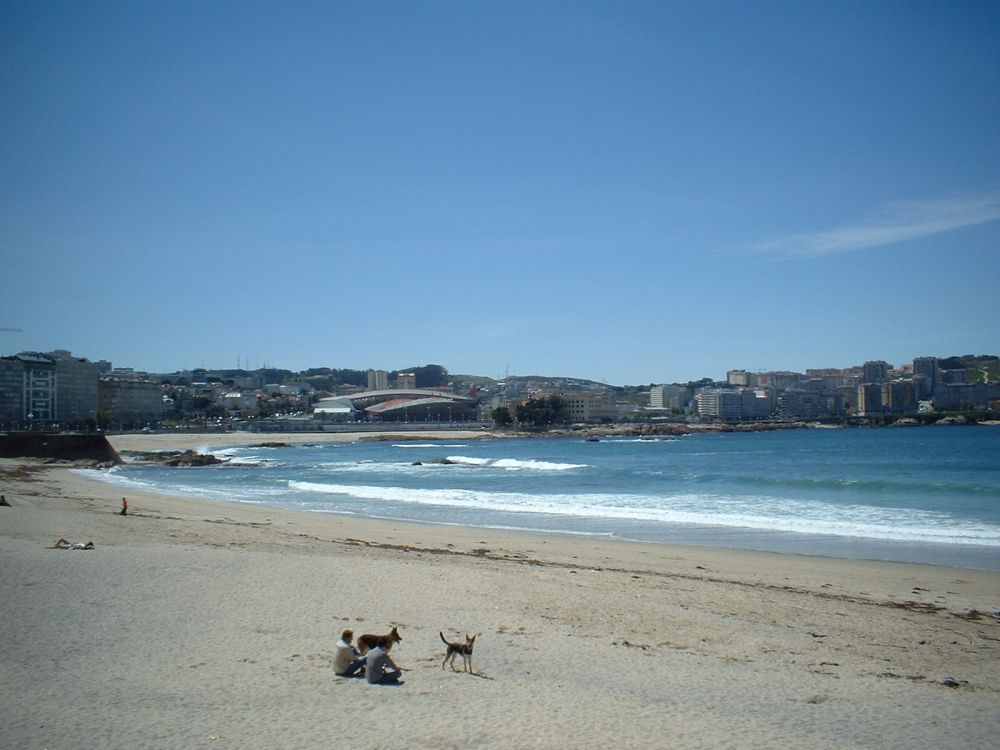 The club were actually founded in 1906 and the local brewery, Estrella de Galicia, has commemorated this date by brewing a malt beer which is very popular in Galicia, even among the people of Vigo whose football club Celta de Vigo are arch rivals!! The football club which plays in blue and white has various names like El Depor, Deportivo, Los herculinos (herculeans), Blanquiazules (blue and whites) and Riazor Blues and to its arch rivals Celta de Vigo are known as the turks. The reason maybe due to the fact that the local people (los coruñeses) are open and the city cosmopolitan so they not considered by their rivals to be gallegos (galicians). In return celtistas (Celta fans) are called portuguese given the proximity of Vigo to Portugal.There are many bars in the city like in Calle Barrera where you can find football memorabilia some of which is quite historic (old photos,football shirts,tickets etc) and so the club is an important part of the local history and culture of the city.

Deportivo have won the spanish league (La Liga) once in their history in the 1999–2000 season under manager Javier Irureta which was an amazing achievement for such a small and modest galician city (population just under 250,000) and hence attracted a lot of world interest as we entered the millenium. The Club has also finished as runner-up on five occasions. In addition,Depor has won the Spanish Cup (Copa del Rey) twice in 1995 and 2002 and three Spanish Super Cups. They have finished in the top half of the table in 16 out of 19 seasons on their return to La Liga which occurred in 1991, the most  succesful period of their history when the team was known as  “Super Depor”.  It was during this period that the club has been a regular participant in European competitions, playing in the UEFA Champions League five seasons in a row, and reaching the semi-finals in 2004 when they lost to José  Mourinho's Porto 1-0 on aggregate.  However, the long history of the club has seen them get promoted and then relegated from the first division and in recent years this has continued with succesive promotions and relegations. The best years from 1988 were steered by president Augusto Joaquín César Lendoiro who has just left the club after 25 years. He was able to persuade some of the worlds finest players to sign for Depor often for a bargain transfer fee. But the price was high as when the economic crisis arrived Depor were left with a huge debt which they are trying to reduce but at a great sacrafice. Now with a limited football squad they are fighting to get promoted under the popular galician coach Fernando Vázquez  from the Second Divison thanks to the younger players whom are now getting a chance in the first team. Galician footballers do now have a bright future and have more prospects for playing for the club. 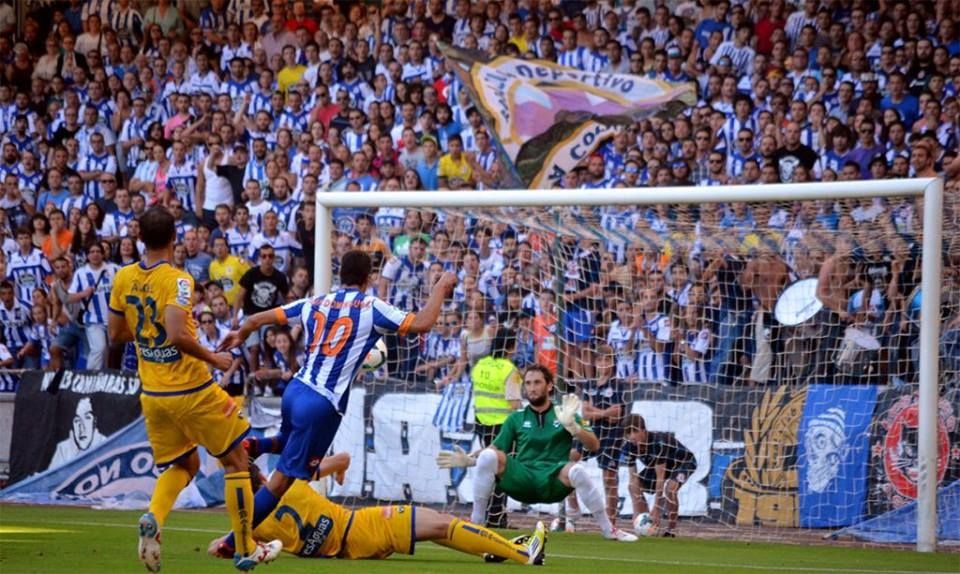 In terms of footballers over they years Depor has been blessed with some great players. Back in the 1940s it was Juan Acuña, the goalkeeper who was the real star. During the 1950's it was Luis Suarez who still has an apartment here  and who actually won the european footballer of the year award, the only spansih player ever to win it. After some up and down times came and went the I990s saw the club's most successful period thanks to great players like the brazilians Bebeto and Mauro Silva (both won the world cup twice) and the local boy Francisco Javier González Pérez who stills lives in the city. The Club finally won La Liga and had some great players like Donato, Naybet, Diego Tristan, Djalminha, Fran,Roy Makaay and Mauro Silva. It was during this golden period we had the fortune to see at close hand this success and to follow the players including during their training. It was a skillful and attacking team under Irureta and the players liked to pass and were great professionals that loved their city and the fans. Without doubt on the pitch it was Mauro Silva who caught the eye the most who won the midfield battles with his tough tackling and competitve play helping to gain and control possession and he gained a lot of respect from the top european players of his era. With players like Djalminha and more recently Juan Carlos Valeron being the playmakers and creating the goals.
The good times have created a legacy as many players continue to keep Depor and the city close to their hearts. A city where the fans are well known for their hospitality and for its quality of life. The passionate supporters never cease to surprise so no matter what results are on the pitch their loyal following is well admired throughout Spain and the fans even won a national award, or man of the season!. You can often hear them chant during the game Depooor Depooor Depooor!  This all augers well for the continued success of Depor in the future, In the history of spanish football they remain one of the great teams and deserve first division status. It may take a weatlthy new owner to guarantee alot more cup success in the future but the future history of the club is bound to be as interesting as its past. 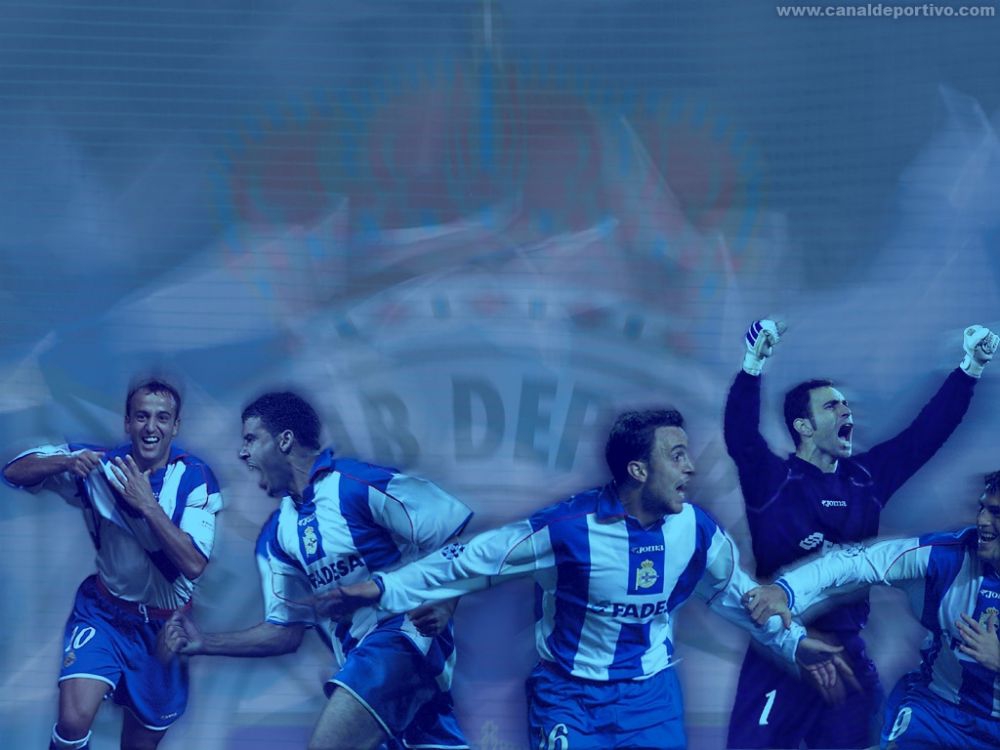